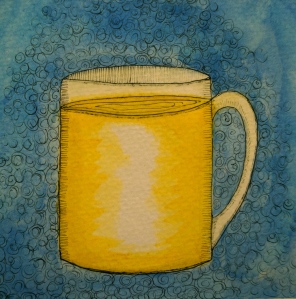 It had been several years since we’d been up on the Sunshine Coast of British Columbia. After all, the trek requires a drive across the border, a sluggish traffic grind through Vancouver, and a ferry cruise to Langdale followed by a meandering ride up to Bargain Harbour. There, on a rock jutting out into the gray waters of Georgia Strait, in a tiny wooden cabin with a view so remarkable it makes your heart ache, our dear friend S lives with her cat Peaches.

R and I had come to spend Boxing Day morning with S, but when she opened her door, we were shocked. Our friend, who had just turned 80, looked years younger than when we had last seen her and it wasn’t just the twinkle in her eyes or her ear-to-ear grin. She emitted a kind of energy, a golden corona that reminded me of the Virgin of Guadalupe, and made us gasp.

“So beautiful!” I added, wondering if she’d had plastic surgery.

“Golden milk,” S told us in her musical British accent. “I’ll make some for you.” 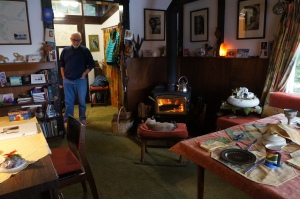 The fire was roaring in the woodstove as we entered the 400 sq. ft. cabin. We removed our shoes and had our bones warmed by S’s signature bear hugs. We looked around. On every wall hung black and white, nearly life-size photo-portraits of Lacandon (Maya) people, shot in the jungles of Chiapas by S’s husband, C. Like ghosts, the women, men and children in the photos felt present, tangible, but diminished by time and the eradication of an earlier culture. Many of them had, in fact, passed on, as had C sixteen years earlier.

But S was still sharing her life with her husband. She wore the golden wedding ring he had slipped onto her finger and continued to use his name in her email address. Every surface in the room was decorated with artifacts the couple had collected on their journeys to Mexico, and during voyages in the wooden sailboat that rests in peace in an open shelter down a path at the edge of the rock. Books, journals, assorted articles and documents were piled on shelves and a small desk as though some serious research had been going on. Quartz lamps burned like torches in an Andalusian cave. The overall effect was of a cozy salon in which important and scholarly conversations took place. 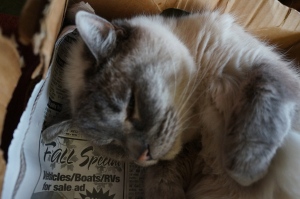 S seated us around a table that dominates the room, R closest to the woodstove, me across from him and next to Peaches who slept in a cardboard box lined with newspaper. S stood near the entrance to the kitchen area, the embers from the woodstove pulsing red and gold around her like an aura.  She looked like a being made of light.

“She loves it when you pet her,” S told me, so I did, not having the heart to tell my friend that I’m quite allergic to cats. “I’m going to make your golden milk now. And then while you sip it, I’ll tell you about how I was recently reborn.”

“I’m going to watch you,” I said rising, moving away from Peaches, “so that we can make it at home.”

This is what S did:

She took a jar of turmeric paste out of the refrigerator and explained how to make it.

Place ingredients in a small pot and stir frequently with a wooden spoon for 9 minutes on medium low. Add more water, if necessary, to maintain a smooth paste. Pour into a glass jar, cool and cover.  Keep for up to 2 weeks. 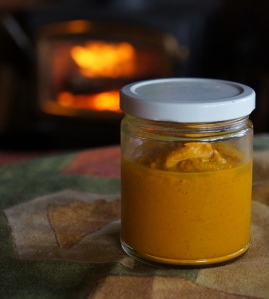 Then S made the golden milk.

Heat milk, sweetener and optional spices on stove or in microwave until hot, but not boiling, then stir in the oils, if used. Serve with a little spoon to stir every now and again.

As R and I sat stirring and sipping what must surely be the most exotic and wonderful drink ever made, a cross between chai and eggnog, S looked out toward the water and told us about her transformation.

“It happened quickly, a synchronicity, you might call it. I had grown tired of things as they were: the arthritis pain in my hands, my back, my legs; having to walk with a stick; the hours I wasted staring at the t.v. I wanted something more and I knew that change must always come from within, so I opened myself up to that. I started to envision the changes that were needed, like a fountain instead of a television. I could actually actually see it. I got rid of the t.v., put the fountain that you see there in its place, and immediately I began to feel like a different person. Not a changed person, a new person.”  She paused, smiled, and continued, “Quite simply, the old S has been completely replaced. This may be hard to understand, of course, and you should know that I still stare out, but at nothing, which is quite delightful.”

We were saucer-eyed because we could see that what she said was true.  S was not the same person.

S giggled, and we did, too. “Then, around the same time I discovered golden milk and began drinking it every day. Soon my pain disappeared completely. I stopped using my cane and now I can walk anywhere without it.  My body is not the same body; it, too, has been replaced. Do you see this? I have been reborn, my friends. And now you know how.”

Later, as we were about to leave S and her cabin on the rock, she led R and me down the steep trail that leads to the wooden sailboat on which she and C spent so much of their life together. I walked behind her as she wove her way through the trees like a cougar. It was raining and the ground was slippery and full of potholes and exposed roots and rocks. We could barely keep up, yet we’re much younger, chronologically, than our friend. When we arrived at the boat, S looked at it with such adoration that I thought I’d cry. Oh, how she loves and misses her husband! R took pictures of S and me and a few of S alone, then we climbed back up the hill and hugged goodbye, promising to visit more often in 2014, and maybe even to toss our t.v. over a cliff. (We haven’t done this yet.)

“Thanks for the story and the golden milk recipe,” we told her.  “We’re gonna drink it every day so we can be reborn, like you, S!” And we have, every day, and dang if we don’t feel pretty darn good!

22 thoughts on “The Radical Rebirth of S”