Instructions for living a life:
Pay attention.
Be astonished.
Tell about it.

This morning, I came within a hair’s breadth of death.

I had a cloudy, sinking feeling as I wound my way to my writing cottage in the backyard. For hours I’d been reading Anthony Doerr’s novel, About Grace, in which a prophetic dreamer has repetitive nightmares about his daughter dying in a flood, and his role in bringing her death to fruition. If you’ve read Doerr, you know how his stories inhabit you long after you put them down. I thought a walk might be a good transition before I plunged into my own novel.

It was around 11 a.m., lightly drizzling, and the sky was its usual Pacific Northwest gray when I entered the cottage. Decked out in rain gear, I turned on my laptop and clicked onto Pandora’s French Café so that when I returned from my walk I’d be greeted by the music to which I most love to write. A sudden wave of darkness dimmed the cottage, and when I looked out the window by my desk, I saw rain exploding off the monstrous wisteria and grapes that wind their way along the fence and arbor that surround the cottage. Rain filled the carrot and squash boxes as if they were wooden bathtubs. A tiny stream had started flowing over the brick path that leads from the house to the cottage. I wondered if the water hammering the cedar shingles on the roof would start to leak.

“No way I’m going out in this crap!” I announced to nobody. I mean, heck, it rains here all the time, but when it’s hard enough for us to actually notice it, now that’s some kind of downpour.

On the other hand, I told myself, this is writer’s rain. What would Anthony Doerr do?  And what about that other writer, E.L. Grey, a woman whose work I hadn’t actually read, but I did love the title? How many shades does rain have anyway? I decided to take a photographic inventory. I pulled my hood up over my “New Zealand” baseball cap, checked my jacket pocket to make sure my tiny field camera was there, and walked out into the precipitation. Right off the bat some discoveries were tossed my way.

A Bucket of Drowning Hostas 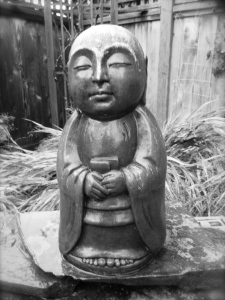 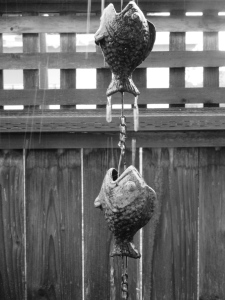 Rain Fish Struggling to Keep Up

It should have been a short slosh to our neighborhood park, a 65 acre urban treasure of cedars, firs, fields, tennis courts and trails, but first I needed to cross one trafficky street. I checked both ways, clear, stepped off the curb …and this is where the story starts to get weird… a white car appeared out of nowhere, roaring forward at a million miles an hour. It was within inches of me and my first thought was, There’s no way out of this, I’m dead! My second thought was, Who will tell R?  Yet, I felt completely calm, even at the exact moment the car should have rolled over me, or maybe passed through me, and even as I felt myself being yanked back and tossed on the sidewalk.

I looked behind me, all around me, and there was nobody there. I must be dead, I thought, though everything looks just like it did before that car killed me. A woman appeared out of nowhere, just like the car. She was profoundly beautiful, with black hair, a luminous complexion, a black sweater made of something soft like mohair, and black pants and boots. The fact that she was smoking a really long cigarette seemed so out of character with the rest of her appearance that I giggled.

“Are you okay?” she asked, reaching out to hug me with her free arm, taking a drag with the other. “That man, I saw him racing toward you. There is something very wrong with that guy.”

“You are,” she said, rubbing my back, which made me feel as tranquil as that Valium a doctor once gave me just before I had knee surgery.

“Then someone or something saved me. Do you believe in angels?”

“I do,” she said, just as the same white car that had almost killed me screeched around the corner and stopped directly in front of us. A man about my age, puffy, white haired, in a brown leather coat, jumped out and moved toward us. He face was red with rage. I shot across the street into the public rose garden that borders the park and didn’t look back. Was he going to finish me off this time? But, instead, he started screaming at the woman.

“You f-ing bitch! Always getting in the way. I’m done with your pranks!”

“Go back to hell!” I heard the woman shout. There were footsteps and a car door opened, closed, an engine started up. I thought it was the man leaving, but when I looked back, I saw the woman drive off behind the wheel of a battered black Volvo station wagon that hadn’t been there before. The man was walking toward me. Fast.

“Wait! Wait!” he called in a completely different, gentle voice. “Are you okay? I’m sorry. Please forgive me. I was so mad at that horrid woman and…”

“Never mind,” I interrupted him, moving closer, still stoned from the woman’s touch. “I’m okay, a bit shook up and I need to have a good cry in the park, but I’m alive! That’s what’s important. Actually, I think I’m going to pray the Rosary, the whole thing if I can remember it. I’m so grateful to be alive. Maybe you should pray, too.”

“Already did,” he said, looking at the grass between the rows of rose bushes.

And then I did something that completely shocked me. I put my arms around him and held on for what seemed like a timeless amount of time, until it felt right to let go. Until we both seemed like one still pond, and then I walked into the park and found more shades of rain. 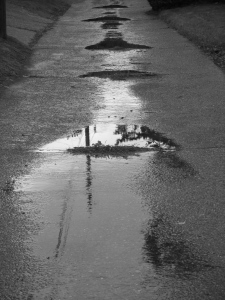 A Bubbling Vortex in the Middle of the Trail

A Puddle of Sky

The Reflection of a Black-haired Woman’s Face

Eventually, the rain stopped and the sky was a lighter, solitary shade of gray. I was shocked as I looked at my watch and realized that nearly three hours had passed. I’d prayed over one hundred and fifty Hail Marys, taken twice that number rain photos and I was ready to head home to write. When I reached the spot where I’d almost died, I stopped. Something was drawing me, calling out to me, reminding me that, unlike today, someday I will actually die. I took one more shot so that I wouldn’t forget that life has endless shades for me to explore until that time. Then I smiled and called back, “THANK YOU!” 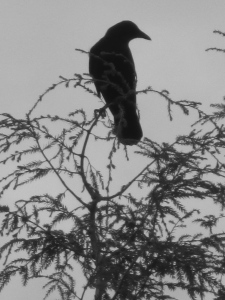 When I arrived at my house there was a package on the porch addressed to me. Curious, I looked inside and there was a book I’d recently ordered by Atul Gawande, a surgeon with whom my daughter once worked. The title? Being Mortal.

18 thoughts on “At Least Fifty Shades of Rain, or Memento Mori”