Today is our last day in Spain and while R works on his profoundly beautiful watercolor of a wine press in Gaucín, I’m thinking about bidets. There’s one upstairs that seems to be calling, “¡Venir! ¡Venir!” (Come! Come!) to me.

If you’re a North American and haven’t traveled to Europe, you might not have encountered this

according to Wikipedia. Until I lived in Florence, Italy in the late 60’s I hadn’t either. In fact, on first glance I believed the strange sink on the floor was for rinsing out diapers, though we hadn’t had any babies yet, or for handwashing clothes since our bathroom was also fixed with a clothesline. My brilliant first husband, G, had another idea. He added a bit of ice and turned the bowl into a Nostro Azzuro beer cooler for our near-daily parties. When we ran out of birra, we used the bidet to wash our feet after a long day of hiking through the dog-plop-encrusted streets of bella Firenze.

It’s not surprising to have discovered the bidet in Italy because at least 97% of the households there have them. In addition, the Ministry of Health on July 5, 1975 instituted the following amendment:

“Article 7: [3] For each apartment, at least one bathroom must be equipped with the following sanitary facilities: toilet, bidet, bath or shower, washbasin.”

It’s a law in Italy! Not sure about Spain, but every place we’ve ever stayed here has had un bidé.

As I was writing this, R paused from his painting and asked me, “Do you want me to sketch our bidet for you, Darling?”

“Sí, Amor,” I answered in the sexiest voice I could muster, trying to sound like Pablo Neruda in Il Postino. 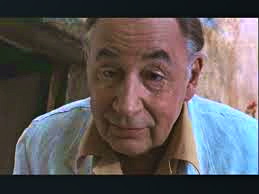 R ran upstairs with my journal. It took him less that five minutes. When he returned, he inked his drawing.

“That’s your job, Love,” he told me, getting back to his own painting. I muddled through, as you can see. But, obviously, I’m more of a photographer than a painter and, since I was never actually going to use our bidet for its intended purpose, I took a few shots. 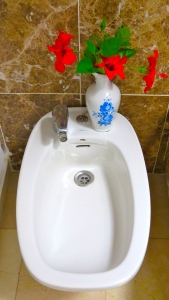 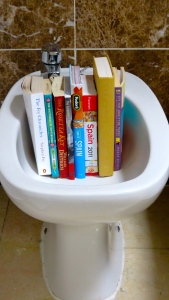 My favorite is Bidé con Libros, because I’m a book lover and can imagine spending delightful hours reading Lorca from La Colección Bidé.

“Moon, moon, moon, run!
If the gypsies come,
they will use your heart
to make white necklaces and rings.”

Though I don’t believe a word of what follows, I again quote Wikipedia, the modern informational vulgute which I obsessively peruse:

“From an environmental standpoint, bidets can reduce the need for toilet paper, saving households money on paper products and allowing users to reduce their carbon footprint  by reducing their paper waste over time. On the other hand, they may modestly increase the amount of heated water used in the bathroom.”

Possibly, there’s a gotita of truth in that last sentence, though not enough to persuade me to turn on the water.

Lastly, here’s a bit of musical silliness related to the beloved bidet from Tomster, a guy who clearly knows his stuff:

I HAVE A BIDET!

14 thoughts on “Bemused by the Bidet”