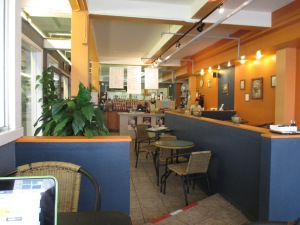 There are strange things done in the midnight sun…
Robert Service, from “The Cremation of Sam McGee”

Fairbanks, Alaska has whacky weather! Two days ago it was 72 degrees out on the Chena Marina where we’re staying for a month. The sky was robin egg blue, bright, poofy-clouded and beautiful right up until about 11 p.m. when the sun decided to pack it in. Today, a cloudless, faded lavender dotted with the occassional raven hangs overhead, it’s 38° and snowing. Seriously! Not a sticking-to-the-ground kind of snowing down here in the city where my daughter dropped me off at Coffee Time Espresso so I could write, but still snowing on Cinco de Mayo. Most of the locals chatting around me are thrilled. After all, says one “I start to melt around negative ten.”

Being back in the Alaskan Interior at this time of year, I’m starting to notice things beyond the weather, the perpetual sun, and the blackout shades in our bedroom that help us avoid partying all night. Everyone says this is the ugly time in Fairbanks because the snow has melted leaving waves of mud on the dirt roads and endless diapers and plastic bags scattered on the ground or clinging to the bush. Fortunately, this Saturday is annual Clean Up Day so glove-wearing volunteers will be outdoors stuffing their yellow bags with whatever they find.

But I’m wondering where all that trash will go. We drove to the dump this morning with our bags of garbage and the bins were overflowing onto the ground. The landfill appears to be filled, ladies and gentlemen, and the ravens couldn’t be happier!

Another thing I’ve noticed is that when the snow melts, the “MOOSEquitoes,” as little r calls them, create a cosmos of buzzing blackness around your head. The first of these bloodsuckers are enormous and slow enough to nail with a clap, a slap or a tennis racket zapper. But their bites are vicious and reindeer dog bar-b-ques inevitably have to be moved indoors. In a few weeks though, these fat vampires will be replaced with smaller, faster swarms of strafe-bombing, blood-vacuuming machines that continue to torment, reaching a peak during August rains and eventually disappearing, thank God, after the first frost. 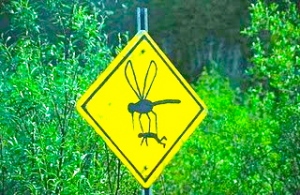 R wanted to test the effectiveness of our citronella repellent on these bloody terrorists, so he stood out in the backyard near the septic field and waited. About a second later when the unofficial Alaskan State Birds arrived by the millions, he applied bug juice and they fluttered away. 10 minutes later they were back. R applied the juice again, a mass exodus followed, and in another 10 R was pretty much eaten alive. Perhaps 10 minutes of relief is better than no relief, but tomorrow, R’s determined to experiment with deadly DEET, plus blended garlic, lemon juice and 1/4 C. squished MOOSEquitoes, if necessary, but I’m not holding my breath. D, our daughter, has promised to purchase two or more wall-mounted electrocution stations by the weekend, so maybe we’ll be grilling some frozen moose outdoors, after all. 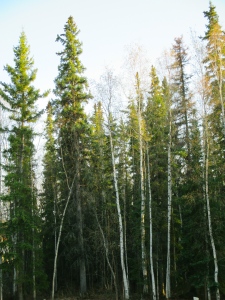 To be fair, beyond a bad bug situation this has to be one of the most naturally engaging places anywhere. Just outside, a fringe of white spruce wraps around the property. It is beautiful, lush and also edible. Yesterday, Little r, “Scratchy” (R) and I decided to collect a few new tips for tea. We headed out the front door and were greeted with the view in the photo above. Little r carried a baggie in which we dropped the easily snapped-off tips to which he added a rock or two and a few cones and creatures from the ground. Here’s how we made the tea: 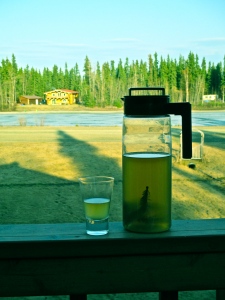 Notes:
1.  Any evergreen tips will due. Fir is mild, pine is delicious. Spruce is the most exotic and therefore the best.
2.  More water can be added, depending on the strength desired.
3.  Honey may be added additionally, or ginger, or both.
4. Spruce tea is rich in vitamin C and may have many other health benefits that you may wish to explore at  http://www.greenchedy.com/herbal-teas/spruce-tea-for-cancer-wounds-and-ailments-of-heart-and-lungs/

In the meantime, remember to go out and play no matter how dreary the day!