When Rilke set off on his journey to Spain, he hadn’t heard of Ronda,
where he arrived, almost by accident. 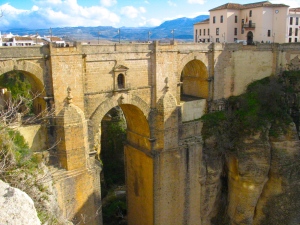 We were heading to Ronda, a charming city in the mountains of Andalusia. I was blazing with excitement because the night before I’d read that poet Rainer Maria Rilke had spent a few months writing there, at the Reina Victoria Hotel in the winter of 1912-13. His room, 208, was now open to the public as a little museum. R was stoked, too, because hanging in our Pacific Northwest home is an exquisite painting by Sharon Kingston, a talented local artist who pairs her atmospheric pieces with quotes by Rilke. We love Sharon’s work, and we love Rilke.

My eyes already touch the sunny hill.
going far ahead of the road I have begun.
So we are grasped by what we cannot grasp;
it has inner light, even from a distance-

and charges us, even if we do not reach it,
into something else, which, hardly sensing it,
we already are; a gesture waves us on
answering our own wave…
but what we feel is the wind in our faces.

“We could take some pictures … share them with Sharon,” I said as R navigated the serpentine curves of A-397 to an elevation of 2,425 feet.

“We could read some Rilke in 208,” I said, fairly faint with romantic possibilities.

“Uh, huh. Did you bring some poems along?”

“We could find a bookstore and …”

“He wrote in German.”

R had a point. We pulled into Ronda, parked the car in a lot with a “Libre” sign, which meant “free,” as in available, but not as in no-charge, “gratis,” as many tourists think until they have to cough up a bunch of Euros at the end of the day. It was shockingly hot as we climbed out of the car and walked single-file along the foot-and-a-half of shade hugging the buildings on one side of the street. Almost immediately, we came across a tiny librería, a bookstore. In Spanish, I asked the charming lady behind the counter if she had any books of poetry by Rilke and she led me to a table with several, all in Spanish.

“Nothing in English?” I asked her.

She shook her head and pointed to a small book in German. I settled for En Ronda: Cartas y Poemas, Rainer Maria Rilke in Spanish, which I’d need to translate, but at least I could read it in Room 208, once we found the hotel.

La Reina Victoria Hotel is not easy to access, especially when one is slowly evaporating from the heat. We headed down the long path that winds above el Tajo, the terrifying canyon on top of which Ronda sits, until we reached the iron gate of the hotel. Locked.

We retraced our steps until we we thought we’d cleverly discovered a shortcut through the back of the Iglesia de la Merced (Church of the Mercy), but we were wrong. A tiny nun who looked like an angel in her starched white habit approached us. She had the face of an angel, too. Perhaps she really was …

“This is a private area,” she told us, smiling, “a convent. Where are you going? It’s very hot, no?”

When I answered in Spanish, the little nun was delighted. “Where are you from? I have a sister in Philadelphia. Many years ago I lived in the United States for a while, but I’ve forgotten all my English. Santo Señor, so hot today!”

She was a generous conversationalist, our monjita, and adept at giving precise alternative directions to the hotel. As we ambled on, Rainer Maria Rilke’s presence in Ronda became more evident.

And then, finally, there we were.

At the very hotel where Rilke hung out one winter!

Only, inside it had been completely remodeled into a muy elegante botique hotel. Gorgeous, actually, but not at all Rilkesque. Still, we could feel, or imagine the essence of the poet and asked the manager at the front desk about visiting room 208, the little museum where Rilke had written his poems and letters, and slept. The manager wrinkled his brow as if he didn’t understand Spanish or was too new on the job to have heard about a famous poet who had lived here, briefly.

“Well … you see … that room was remodeled and now we have moved the few preserved artifacts to just past the bar at the entrance to the spa.” He pointed straight ahead. “Derecho, señora.”

As we passed the bar, a beluga of a British man on a stool spilled a beer all over himself and the floor. “Shit!” he spouted, as we came upon the diminuitive exhibition of Rilke’s realia behind a glass display case. There were a couple of books, a photo of the poet that I’d already seen on Wikipedia and a framed page of something he’d written in German. Oddly, I was most interested in an old copy of his hotel bill, too far away and faded to make out, but proving without a doubt that Ranier Maria Rilke had, indeed, been here.

“Are you going to take a picture or two for Sharon?” R asked me.

“You bet!” I said, trying to sound excited. “How much do you think a room cost back then, anyway?”

“I have no idea, Darling. Let’s grab a beer and some snacks.”

We headed outside to a beautiful sombrilla-shaded seating area, ordered cervezas, a plate of local cheeses, spinach croquettes and a bottle of agua con gas, sparkling water. The waiter, Pedro, told us it was too hot to sit outside, but we disagreed because we knew that what we saw before us was what Rilke must have seen from this exact place where he was sure to have stood, and where his statue now stands permanently, we hope, gazing out on inexpressable beauty.

These last two photos, especially, are for you, Sharon Kingston, and if you haven’t already traveled to Ronda, we hope you’ll be able to someday, because Ranier Maria Rilke is still here with his journal in hand, the same hand that wrote, only in German, of course:

I have sought everywhere the city of my dreams, and I have finally found it in Ronda. 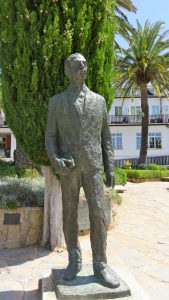 Anthony Stephens’ quote translated by the author from his introductory notes in En Ronda, published by PRE-TEXTOS, 2012.

“A Walk” by Rainer Maria Rilke, translated by Robert Bly.

13 thoughts on “Rilke in Ronda”